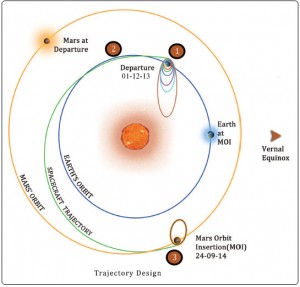 The 440 Newton Liquid Apogee Motor (LAM) of India’s Mars Orbiter Spacecraft, last fired on December 01, 2013, was successfully fired for a duration of 3.968 seconds at 1430 hrs IST today (September 22, 2014). This operation of the spacecraft’s main liquid engine was also used for the spacecraft’s trajectory correction and changed its velocity by 2.18 metre/second. With this successful test firing, Mars Orbiter Insertion (MOI) operation of the spacecraft is scheduled to be performed on the morning of September 24, 2014 at 07:17:32 hrs IST by firing the LAM along with eight smaller liquid engines for a duration of about 24 minutes.

The Launch Vehicle – PSLV-C25 will inject the Spacecraft into an Elliptical Parking Orbit with a perigee of 250 km and an apogee of 23,500 km. With six Liquid Engine firing, the spacecraft is gradually maneuvered into a hyperbolic trajectory with which it escapes from the Earth’s Sphere of Influence (SOI) and arrives at the Mars Sphere of Influence. When spacecraft reaches nearest point of Mars (Peri-apsis), it is maneuvered in to an elliptical orbit around Mars by firing the Liquid Engine. The spacecraft then moves around the Mars in an orbit with Peri-apsis of 366 km and Apo-apsis of about 80000 km.

1. Geo Centric Phase
The spacecraft is injected into an Elliptic Parking Orbit by the launcher. With six main engine burns, the spacecraft is gradually maneuvered into a departure hyperbolic trajectory with which it escapes from the Earth’s Sphere of Influence (SOI) with Earth’s orbital velocity + V boost. The SOI of earth ends at 918347 km from the surface of the earth beyond which the perturbing force on the orbiter is mainly due to the Sun. One primary concern is how to get the spacecraft to Mars, on the least amount of fuel. ISRO uses a method of travel called a Hohmann Transfer Orbit – or a Minimum Energy Transfer Orbit – to send a spacecraft from Earth to Mars with the least amount of fuel possible.

2. Helio Centric Phase
The spacecraft leaves Earth in a direction tangential to Earth’s orbit and encounters Mars tangentially to its orbit. The flight path is roughly one half of an ellipse around sun. Eventually it will intersect the orbit of Mars at the exact moment when Mars is there too. This trajectory becomes possible with certain allowances when the relative position of Earth, Mars and Sun form an angle of approximately 44o. Such an arrangement recur periodically at intervals of about 780 days. Minimum energy opportunities for Earth-Mars occur in November 2013, January 2016, May2018 etc.

3. Martian Phase
The spacecraft arrives at the Mars Sphere of Influence (around 573473 km from the surface of Mars) in a hyperbolic trajectory. At the time the spacecraft reaches the closest approach to Mars (Periapsis), it is captured into planned orbit around mars by imparting ∆V retro which is called the Mars Orbit Insertion (MOI) manoeuvre. The Earth-Mars trajectory is shown in the above figure. ISRO plans to launch the Mars Orbiter Mission during the November 2013 window utilizing minimum energy transfer opportunity.